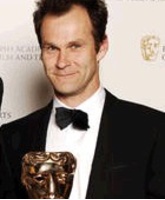 Peter Moffat is a British playwright and screenwriter· His first play was called ' A fine and private place' which was a radio play· His best-known plays are Nabokov's Gloves and Iona Rain·A former barrister, he is the creator of four British television legal dramas: Kavanagh QC, North Square, Criminal Justice and Silk· He also wrote the miniseries Cambridge Spies and the television film Einstein and Eddington, as well as a reinterpretation of William Shakespeare's Macbeth for the BBC's ShakespeaRe-Told series· Moffat won the Writer's Award from the Broadcasting Press Guild for North Square, and was nominated for a BAFTA Award in 2004 for writing Hawking, a tv drama about the scientist Stephen Hawking· He was recently awarded two baftas British Academy of Film and Television Arts, for Criminal Justice , and another as a writer, a best writer Bafta craft award· He is married to an author and has two teenage children·