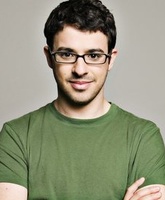 Bird was born in Guildford, Surrey· He was educated at the Royal Grammar School, Guildford· He also played for local football club, Onslow FC· He went on to study English at Queens' College, Cambridge· In his final year at Cambridge, 2005–06, he was club president of the Cambridge Footlights where he regularly wrote and performed· He is the son of Graham Bird, an economics lecturer at the University of Surrey·[2] His brother, Alan Bird, is the current Head of Sixth Form at Brighton College·